Sometimes, music tells a story more succinctly than a speech, and on Wednesday, Lady Gaga managed to capture the message of Joe Biden’s inauguration, and the span of American history, in just one note.

It lasted four soul-stirring seconds, deep into a performance of the U.S. national anthem for which the pop megastar strode to the stage gripping a golden microphone and sporting an oversized peace-symbolizing dove lapel pin.

Gaga cast a glance across a balcony that two weeks ago was filled by an angry mob attacking the Capitol. In that moment, she improvised on the anthem’s melody, slid up a half-tone to a C sharp and held it there in a lung-depleting extended finale to the line celebrating the endurance of the American republic:

“And our flag was still theeeeee-eeeeeere.”

It so happens that the author of that anthem, Francis Scott Key, was also a virulently committed slaveholder who not only aggressively prosecuted but even sought to execute abolitionists, the unheralded heroes of his time.

On Wednesday, this slaver’s poem rang out over the National Mall in a ceremony in which a Black and South Asian woman, Kamala Harris, became the vice-president of the United States.

And there’s the story of America in four seconds.

A call to unity

It’s a place that has repeatedly suffered political violence, that’s often had its politics embittered by racial hatred and inequality, and which manages to break some barriers, on occasion faster than many nations around the world whose residents revel in judging it.

The new president used his inaugural address to tell that same story. Biden’s version, unlike Lady Gaga’s, lasted 2,500 words, but like Gaga’s, it gained unusual poignancy after the democracy-testing events of the last few weeks.

It was a call to unity that didn’t gloss over the nation’s imperfections. In fact, Biden embedded America’s failures squarely in his message.

“I know speaking of unity can sound to some like a foolish fantasy these days. I know the forces that divide us are deep, and they are real, but I also know they are not new,” Biden said.

“Our history has been a constant struggle between the American ideal that we are all created equal and the harsh, ugly reality that racism, nativism, fear, demonization have long torn us apart. The battle is perennial, and victory is never assured.” 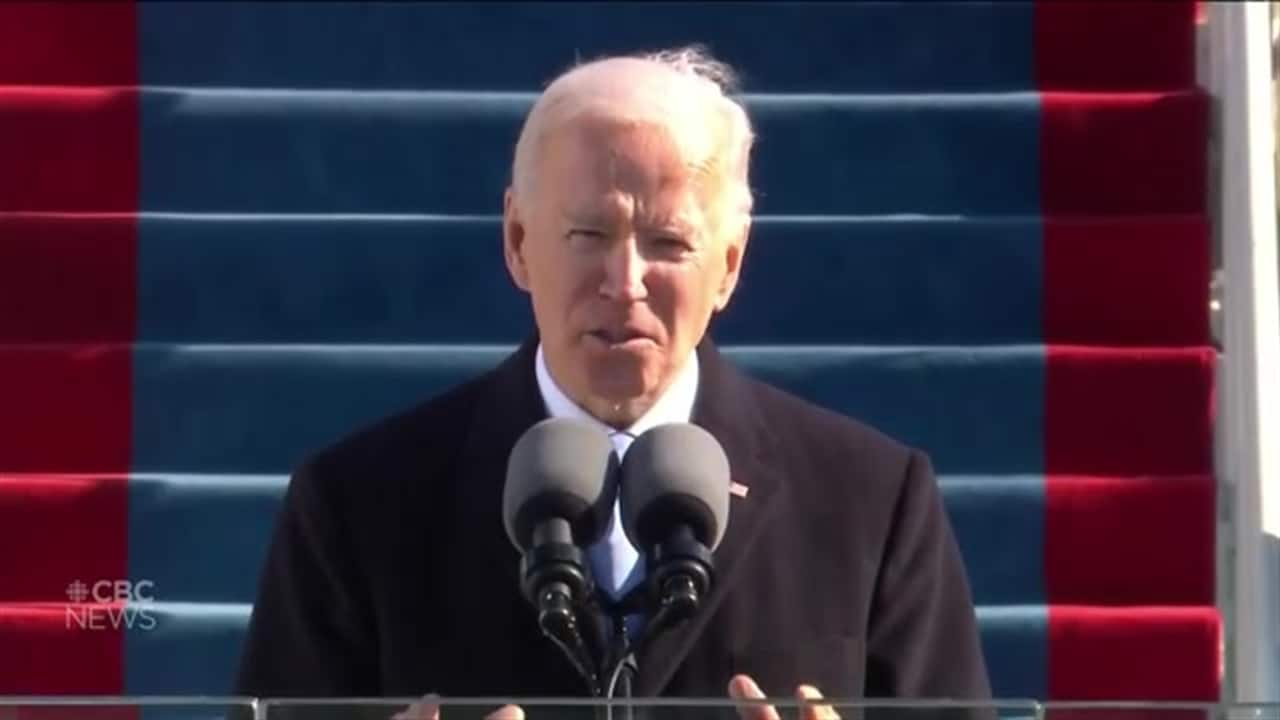 In his inauguration speech, U.S. President Joe Biden asked Americans to “set aside politics and finally face this pandemic as one nation.” 1:36

He referred to the Jan. 6 attack and described this year’s troubled transition of power as a moment of triumph for the battle-tested 232-year-old republic.

“Democracy is precious. Democracy is fragile. And at this hour, my friends, democracy has prevailed,” Biden said.

Of course, calls to unity are usually more easily pronounced than achieved.

And the country is dredged in reminders that Biden’s desire to unify the country faces towering and perhaps insurmountable obstacles.

Biden said politics need not be a raging, goodwill-consuming fire and that adversaries should be capable of disagreeing without detesting each other.

Yet the desire for political combat runs deep.

Even this saccharine speech from Biden drew a reprimand from one of the country’s upstart right-wing media organizations, Newsmax, where an anchor called it dark and divisive.

A top congressional Republican tweeted congratulations to Biden and was flooded with angry replies from across the political spectrum.

Republicans who voted to certify Biden’s election win are being threatened with primaries by pro-Trump rivals who intend to unseat them in 2022.

More than half of the party’s lawmakers in the House of Representatives have joined a challenge to strip Liz Cheney, chair of the Republican conference in the House, from her leadership role after she voted to impeach Donald Trump.

The coming weeks will be a big test. And not just because Trump’s impeachment trial will loom over the Senate’s activities.

The coming test to the unity message

Biden plans to burst out of the gate with a barrage of executive orders that include rejoining the World Health Organization and the Paris climate accord, cancelling the Keystone XL pipeline, restoring the so-called DACA program protecting children who were brought illegally into the U.S. and imposing new mask-wearing rules on federal property.

The harder-to-achieve, more durable, change in American politics comes in law, through bills passed through two chambers of Congress.

The first bill Biden intends to suggest involves immigration, and it would provide a path to legal residency and then citizenship for millions of people.

That proposal will land like a political grenade on the other side of the aisle.

Immigration, maybe more than any other issue in recent years, has been the one that most enrages the Republican base.

Trump recognized that anger and milked it. That’s why Trump went from agreeing with a softer approach on immigration reform, in the early 2010s, to campaigning to restrict immigration in 2015-16.

So it’s far from assured this debate will go smoothly, and far from certain an immigration bill will gain enough Republican votes in the Senate to overcome a 60-vote filibuster override.

The fact that Democrats now control both chambers of Congress and the White House now gives them at least a chance to introduce bills and try getting them passed.

And Biden gets to try writing his page in the American story.

Some inaugural addresses have proven successful predictors of the era ahead. For instance, Ronald Reagan called for less government and lower taxes in 1981, and it generally happened; he called for peace with the Soviets in 1985, and the Berlin Wall fell in 1989.

In 1933, Franklin Roosevelt promised a program of job-creating actions during the Great Depression, and he delivered, in a radical few months of transformation.

Other speeches are half-prophetic. Such as Donald Trump’s in 2017.

On the other hand, Trump also promised to fight against well-connected insiders, yet Trump spent his last day in office relaxing rules for lobbyists and pardoning a number of well-connected and wealthy criminals convicted of corruption.

Other speeches tragically fail to capture the reality ahead.

In 1861, Abraham Lincoln called for unity, too: “We are not enemies, but friends. We must not be enemies,” he said, urging Americans to heed the better angels of their nature. What followed was a devastating four-year civil war.

Lincoln called for unity again in 1865, urging Americans to put aside the bitterness of that war and find charity, not malice,  in their hearts for former enemies. He was killed a month later, and the country wrestled for decades with consequences of that war.

Whatever happens, Biden has already begun adding to an old story. From the country’s founding, partisan tension has threatened to split it apart.

Thomas Jefferson also urged unity in his 1801 inauguration speech at a time when it appeared that what was then still a new nation might not make it. Jefferson referred to the two political factions of the day and urged Americans not to allow differences of opinion tear them apart.

“We are all Republicans,” said the writer of the Declaration of Independence. “We are all federalists.”

On Wednesday, Biden mentioned Jefferson’s timeless words in the American Declaration of Independence — the idea that all men were created equal, endowed with equal rights.

Jefferson, of course, was also a slave holder, so much of a slave holder that, unlike some others in his era, he refused to allow his slaves to be freed upon his death.

And, as Biden acknowledged in his first moments as the 46th president, it’s a complicated story. One not always as sweet as Lady Gaga’s floating C sharp.