As he retires from the Senate this week, Sen. Murray Sinclair says Canada still needs a reckoning on “the systemic racism that has been bred into our very institutions.”

“Indigenous people and people of colour standing up and saying ‘Enough is enough’ is one thing … [but] the people in charge of the institutions that we’re trying to address really do need to take stock of what they’re doing, and change the way they do business,” he told The Current’s Matt Galloway.

Sinclair, 70, retires from the Red Chamber on Jan. 31 to work on mentoring young lawyers in Indigenous law, and to write his memoirs.

He also served as the co-chair of the Aboriginal Justice Inquiry in Manitoba, commissioned in 1988.

Thinking back on that particular work, Sinclair remembers coming to a conclusion that still feels relevant.

“What I said then was, ‘If you get rid of all of the racists in all of the positions of government, policing, justice, health — you will still have a problem. Because you will have a system that is functioning based upon policies, priorities and decisions that direct how things are to be done, that come from a time when racism was very blatant.'”

LISTEN | Systemic racism will ‘dominate the conversation’ for years: Sinclair

Murray Sinclair on how to tackle systemic racism in our institutions 2:17

Sinclair’s appointment to the Senate, in April 2016, came four months after the final report from the Truth and Reconciliation Commission (TRC), which he chaired from 2009-15. The commission was established to hear and preserve the stories of those who survived psychological and sexual abuse in Canada’s residential schools.

He wanted to bring that conversation into the Red Chamber. The Senate scrutinizes all new laws and, as such, had “participated in the cultural genocide of Indigenous people,” he said.

“I thought it was time for there to be a different voice, a different perspective and an opportunity for the Senate itself to acknowledge that, and to begin to move on.”

In a November tweet announcing his retirement, he said his five years in the Senate included work to protect Indigenous languages, reform Indigenous child welfare, and to propose Sept. 30 as Canada’s National Day for Truth and Reconciliation.

On January 31, 2021, I will be leaving the Senate to focus on Indigenous law mentorship and my memoir. While generations of work remain, I am proud of the steps we have taken towards Reconciliation. Thank you to everyone who continues to support this work. <a href=”https://t.co/mifeLCIhXe”>pic.twitter.com/mifeLCIhXe</a>

But he told Galloway that reconciliation is a “constant conversation,” that will continue beyond his years as a senator.

“Each day you have to put effort in to maintain that relationship and also to change the relationship as things come up between you,” he said.

He said it will take decades to undo Canada’s long history of abuse toward Indigenous communities, and will require the same energy past governments used to harm them.

“We have to turn that 150 years of negativity into generations of positivity,” he said.

About 150,000 First Nation, Inuit and Métis children were removed from their communities and forced to attend the church-run, government-funded residential schools, in what the commission called a policy of “cultural genocide.”

The commission made 94 “calls to action” to guide governments toward reconciliation. The CBC has been tracking the progress of those recommendations. As of last month, only 10 were complete.

Sinclair said Prime Minister Justin Trudeau has failed to live up to his promises for reconciliation.

“A lot of the changes that we could have seen to this point in time have not been affected because there hasn’t been enough internal change made to the way the government is doing business,” he said.

He said senior managers within government should have received wider training on the TRC’s findings and recommendations, so they could apply reconciliation principles in their departments.

He added that Bill C-15, tabled last month to bring Canadian law into alignment with the United Nations Declaration on the Rights of Indigenous People, “could have been done five or six years ago.”

However, Sinclair said he has spoken to Trudeau about these issues, and “honestly [believes] that he understands.”

For those frustrated by slow progress, Sinclair cautioned that it takes time to change the way government works.

“It’s like trying to turn a ship, while using a small rudder on the back of it,” he said.

“You have to get everybody manoeuvring that ship so that it begins to turn. And then it begins to turn ever so slowly. And you can’t even perceive the redirection of it until you’re actually facing a different direction.”

Those prejudices persist today, but the question becomes whether people can change, when “given an opportunity to confront their ignorance and to learn more,” he said. 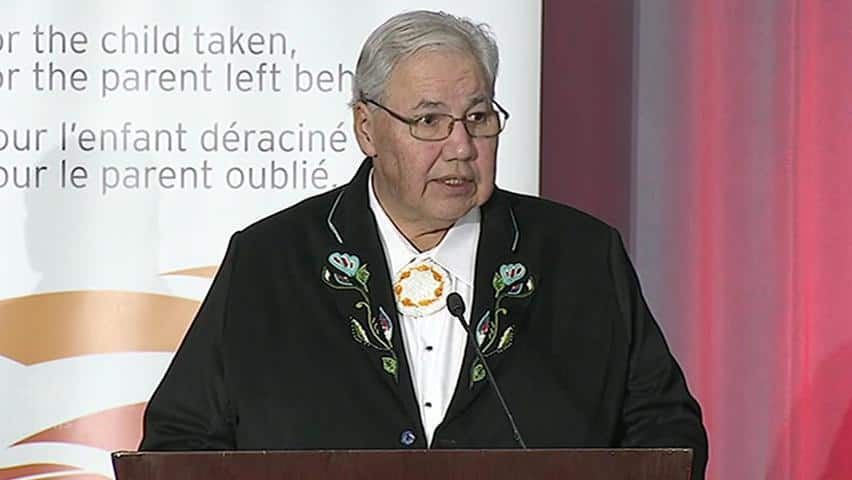 Chair Justice Murray Sinclair speaks about how the stories of residential schools survivors touched the commissioners of the TRC and Canadians. 1:53

He said he believes that Canadians are for the most part “kind and generous people,” and capable of change.

“They contribute to their communities. They believe in Canada as a nation, and we need their support in order for us to continue to grow as a country,” he said.

He said the long-term solutions lie in educating our children “to understand that this is the way that we used to do things, and this was the wrong that came out of this way.”

“Then we will also educate them to learn to respect each other,” he told Galloway.

“Part of that parcel is we also have to ensure that Indigenous people are given an opportunity to regain their self-respect …That means that we now have to ensure that we give back to them those things that were taken away: their languages, their cultures, their means of developing their own sense of identity.”

Written by Padraig Moran, with files from CBC News. Produced by Cameron Perrier.